How to Find the Current Trending Android Games on Google Play

Tags
Android Games
Google Play
In this article, I will give you a tutorial on How to Find the Current Trending and Popular Android Games on Google Play.

Actually, it's not only can be used for Android games anyway, but you can also use it on all of the apps on Google Play.

The Importance of Knowing the Current Trending Android Games

As an Android games enthusiast, of course, we can find out which games are being played a lot by Android users. It's often difficult to find the best games to play right now

So by using these simple tricks, we can find the best Android games these days.

Of course, it's very important to me to know the development of this industry. 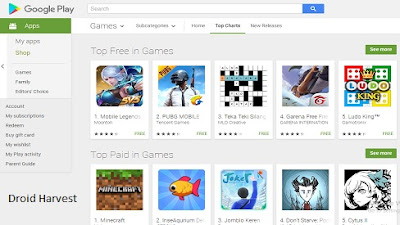 Step 1
First, open the Play Store app that you had installed on your smartphones.

Step 2
Select 'GAMES' menu located on the top of the screen, then tap 'Top Charts'. Later, it will appear more menus such as Top Free, Top Grossing, Trending, and Top Paid.

Top Free contains a collection of free Android games that many downloaded and being played a lot by Android users until now.

Top Grossing contains a collection of Android games that generate more money than other apps in a time period. The money comes from the paid app itself and in-app purchase.

Trending contains a collection of Android games that are recently been released or updated, but many Android users are playing it.

Top Paid contains a collection of paid Android games that are widely purchased and played.

From there, especially from the Top Free and Trending section, you can find out the current trending and popular Android games on Google Play.

How to Display the Popular Android Games in One Category

Keep in mind that the collection of Android games shown above, it's still coming from different categories (genres).

If you just want to display the list of popular games in one type of category, you can use the category menu. There will be a wide variety of genres to select.

Choose one of them, then tap the Top Charts button that pops up to display the popular Android games with the same genre.

How To Make It More Accurate

In order to make the ranking of popular Android games to be accurate, I recommend you to disable the 'view installed apps'. Because if it's active, then the Android games you installed on your phones will be in the top position.

Slide the bar to the left to disable it.

The popularity of this game in each country is also different, if you use United States IP address, then the list is only popular in the United States, not in other countries.

If I want to find the current Android games in different countries around the world, I usually use the Similarweb.com.

How Do We know the Trending Android Game is Good or Not?

Before I install an app, I always see the rating and its reviews first. It's let me not to waste my internet quota.

If the rating is above 4 and most users give the positive reviews, it means the game is quite good and worth to play.

That's How to Find the Current Trending and Popular Android Games on Google Play. Thank you for reading this article.