This is How Google Translate Makes Money for Google - Droid Harvest -->

Home Technology This is How Google Translate Makes Money for Google

This is How Google Translate Makes Money for Google

Everyone is familiar with Google Translate, one of Google's online tools that can help you translate words, sentences, or paragraphs from one language to another.


Although the translation is sometimes inaccurate, Google Translate can at least help us understand the meaning of the words for which we want to know the translations.


So far, we can use it for free. Have you ever thought "What is the contribution of Google Translate to the total revenue of Google?" if the business model is done that way. So, this time we will explain...

How Does Google Translate Make Money?

If you look at it, Google Translate does not appear to be making Google any cash profits. It looks doesn't give any significant contribution to the total revenue of Google. Given that, no advertisement and services are free for individual use.


To be more precise, Google Translate is a great example of a machine learning (AI) product that can get better over time. Assisted by feedback from its users to correct translation errors. 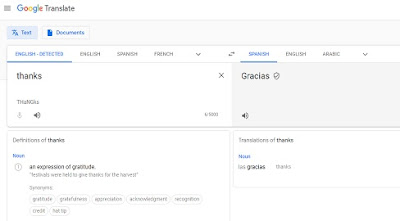 From that activity, Google actually has benefited from the symbiosis of mutualism even though it provides its services for free to its users.


This can then be used to enhance the rest of the service's overall features. For example, such as translating more accurate reviews on Google My Business, Google Maps, and Play Store into other languages ​​or vice versa.


Yes, the fact is, not everything Google does will make money right away. Actually, what is their purpose in doing that?

Of course, to gather as many users of its services as possible to become "die-hard fans" first and not move stalls to another heart. This will be a source of money for them in the future.


Who knows, in the future, they can create a device where language differences are no longer a barrier for humans to communicate with each other. From all that Google Translate brings profit to Google.


That's how Google Translate makes money for Google. Hopefully, this short article could be useful, Thank you for reading.