What Does Vamos Argentina Carajo Mean on TikTok, Twitter, & IG?

Argentina is a beautiful country located in South America. Recently, Argentina's national football team claimed the top spot in the final of the 2022 FIFA World Cup in Qatar.

Today Argentina has become a hot topic for football fans worldwide after winning the World Cup Final against the defending champion France. It was a massive achievement for them.

They achieved it after suffering defeat against Saudi Arabia in the first match of the group stage, but later gradually eliminated teams like Mexico, Poland, Australia, The Netherlands, Croatia, and finally France. 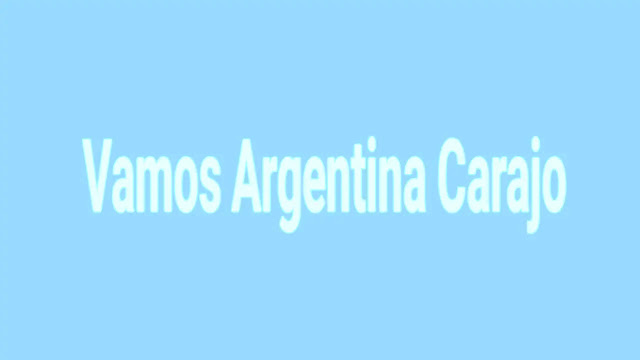 They are the South American country to win the World Cup since Brazil in 2002. So Twitter users have dubbed Argentina's successful journey at the World Cup on social media posts as "Messi's football fairy tale" even though before they questioned, "Where's Messi?"

This is also when the phrase "Vamos Argentina" or "Vamos Argentina Carajo" receives public attention from online social media. Starting from Argentinian footballers and the fans! But what is the meaning?

A chant echoed on social media like TikTok, Twitter, and Instagram. Lionel Messi and the Argentinian supporters yelled "Vamos Argentina" or "Vamos Argentina Carajo" after defeating some of the world's best. What does it mean?

Yes! We know you are curious to search about the meaning of these "Vamos Argentina" and "Vamos Carajo" as well since it's not English words. So let's get started and learn together!

You might go to Google Translate before landing here, but you need a better answer and translation for it. If you put the words "Vamos Argentina," you might get the correct answer. But it will become an incorrect translation if you add "Carajo" which means "Let's go Argentina damn."

So we already make it easier for you by creating a summary in the next paragraph below.

What Does Vamos Argentina Carajo Mean on TikTok and Instagram?

This celebratory phrase started to gain more well-known globally after Argentina qualified for the 2022 World Cup final in Qatar and eventually won it.

Vamos is a Spanish word that means "let's go" or "c'mon," in English while Argentina refers to "Argentina" nation itself, a southern part country of South America.

See also: What Does Dima Maghrib or Maghreb Mean on TikTok, Twitter, & IG?

Why Do Footballers and Fans Say: Vamos Argentina?

Originally adapted from Spanish, one of the country's official languages. It is a motivational phrase used to show Argentinian pride and celebration in real-life or on social media.

So when Argentinian footballers and fans say the phrase "Vamos Argentina" or "Vamos Argentina Carajo" they want to boost their fighting motivation to win more games and express the feeling of prevailing, particularly in sports.

Vamos is not only a word used by Argentinians but also by many Spanish speakers around the world. The Spanish word likely has the same meaning in general.

It's a proud Argentina chant to use when Argentinians want to boost their fighting courage and a celebratory. "Vamos Argentina!" Congratulation on winning the World Cup 2022!