Here's the meaning and purpose of the yellow orange eye icon at the bottom left of your TikTok videos. It's useful!

There is a unique feature currently appearing on the social media app TikTok.

Its sudden appearance without further notice makes many TikTok users confused by the "yellow orange eye" symbol on their viewed videos.

Have you also noticed the "yellow eye" icon on your TikTok videos and made you wonder what it means? 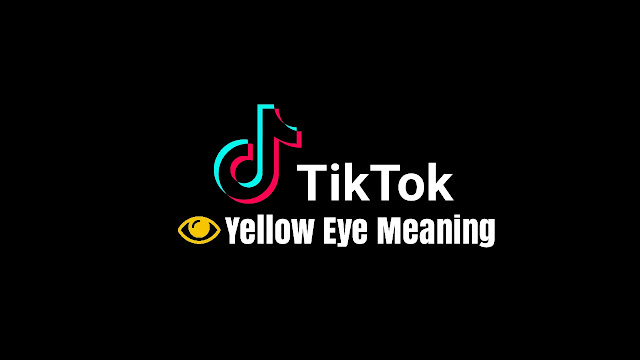 If you're an active user of the social platform, it's necessary to understand the purpose of this new feature and how it can affect your experience on the app.

In this blog post, we'll explore various theories about the yellow eye feature from people on the TikTok app and the internet. Here we go!

TikTok: What does the yellow eye feature do on viewed videos?

The new mysterious feature "yellow eye" on the TikTok app allows users to see which of their followers have viewed their videos.

This symbol can be beneficial for content creators who want to track the engagement of their followers and get a sense of which users are paying attention to their posts.

But here's where it gets a little tricky: according to some users, the yellow eye feature only appears for the first 7 days after they posted the video.

After this period, a general view count, which shows the viewers a video has been received, replaces the yellow eye symbol.

This means that if you want to see which of your followers have viewed your video, you'll need to act fast and check within the first week of posting.

However, other users have reported that the yellow eyes feature appears even after the first 7 days and continues to show which of their followers have viewed their videos.

It's possible that the exact function and appearance time of the yellow eye feature may vary in the testing period, depending on the version of the app that a user has installed or other factors. Remember, it's not yet an officially released feature on TikTok!

In any case, the yellow eye feature on TikTok provides valuable insight into the engagement of your followers and can help you understand how well your videos are performing; whether it's good or bad.

So next time you see those enigmatic yellow eyes, take a moment to consider what they might be trying to tell you.

See also: What Does Croissant 🥐 Emoji Mean on TikTok videos?

What does the yellow eye symbol mean on TikTok viewed videos?

Some users have speculated that the yellow eye symbol indicates that followers have viewed the video but didn't show their care by liking it or tapping the heart button.

Others have suggested that it means the follower once watched the video from beginning to end or checked out the user's profile.

As you can see, a few different theories are floating around about the meaning of the yellow eye symbol.

But here's the thing: until TikTok makes an official statement about the purpose of this feature worldwide, it's difficult to know for sure what it means.

Some users may interpret the yellow eye symbol as a sign of disinterest or lack of engagement, while others may see it simply as a way to track who has watched their videos and account profile.

So, what's the takeaway here? It's essential to keep an open mind and consider the various possible meanings of the yellow eye symbol on TikTok.

Whether you see it as a sign of disinterest or simply a way to track viewer engagement, one thing is certain: the yellow eye symbol is sure to spark some interesting conversations among users.

Are those eyes stalking you, or do you now have the ability to monitor their post view history on your account?

Read also: What Does Two Finger-Pointing 🥺👉👈 Emoji Mean on TikTok?